Day four was a classic ‘Bay Day’ with 12 to 14 knots of steady sea breeze for the 49er, 49erFX and Nacra 17 World Championships in Nova Scotia, Canada.

Ruggero Tita & Caterina Banti (ITA) returned to a perfect performance with three bullets from three races in the steady sea breeze. After the wacky races of Friday when the Italians slumped to 20th in one race, on a boatspeed track Tita & Banti have an extra gear of upwind foiling that is unmatched by any of their rivals.

Best of the rest was another Italian crew, Gianluigi Ugolini & Maria Giubilei (ITA), who have increased their grip on second place with a 13-point buffer on Sinem Kurtbay & Akseli Keskinen (FIN) who continue to hold third overall. John Gimson & Anna Burnet (GBR) finished off their afternoon with a second place which lifts the defending World Champions to fourth overall and within striking distance of the Finnish team.

Two bullets and a fifth made Sime and Miho Fantela (CRO) the best 49er crew of the day. The Croatian brothers move up to second overall and close the gap to the lead to just 13 points. Bart Lambriex & Floris van der Werken (NED) had a solid outing to hold on to the series lead, showing great tactical judgement to steal a second place at the end of the first race and going on to score another second and a seventh. Diego Botin & Florian Trittel (ESP) slipped to third overall behind the Croatians but remain very much in touch, with Logan Dunning Beck & Oscar Gunn (NZL) just one point behind in fourth place. Benjamin Bildstein & David Hussl (AUT) won the last race of the afternoon which lifts the Austrians to seventh overall.

Odile van Aanholt & Annette Duetz (NED) rebounded from a wildly inconsistent performance on Friday with a much more solid showing in Saturday’s steadier sea breeze conditions. Scores of 4,3,2 made the Dutch the outstanding team of the day and puts them back in pole position at the top of the leaderboard.

At the end of race one, the signs were looking ominous for a Swedish whitewash. Once clear of the pack, Vilma Bobeck & Rebecca Netzler (SWE) were about 0.5 knot faster upwind compared with their rivals and it was simply too much for early race leaders Steph Roble & Maggie Shea (USA) to deal with. Could the Swedes go on to dominate the day and extend their lead? As it turned out, no they couldn’t. In the next race they went a bit too far right on the first upwind leg and couldn’t find a clear lane to exert their boatspeed edge. A 14th place finish was less than satisfactory although the Swedes made amends with a 2nd in the last race of the afternoon. This puts them in second place overall, five points back from the Dutch leaders.

The best part of a very good day for the British team was a race win in the second heat of the afternoon, lifting Freya Black & Saskia Tidey (GBR) to third overall. Poland’s Aleksandra Melzacka & Sandra Jankowiak (POL) continue to rise up the scoreboard and a race win lifts them to fifth overall, just two points back from Tamara Echegoyen & Paola Barcelo (ESP) who dropped to fourth after an average outing for the double World Champions from Spain. Martine Grael & Kahena Kunze (BRA) are leaving their bid for the podium pretty late after another up and down day for the Olympic Champions. The Brazilians sit in eighth overall and 30 points adrift of the podium 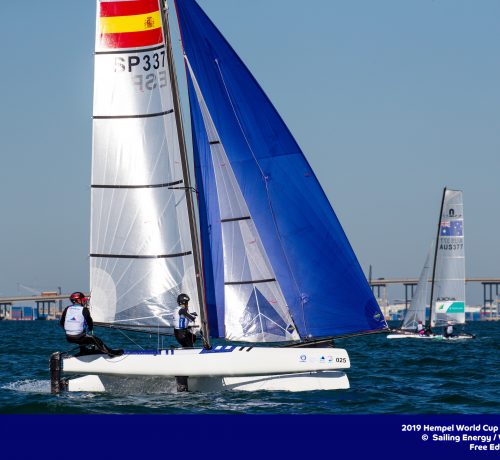 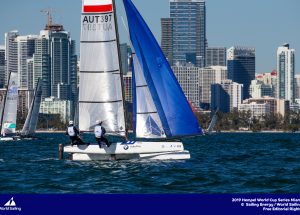 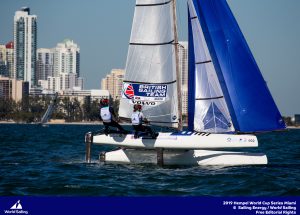