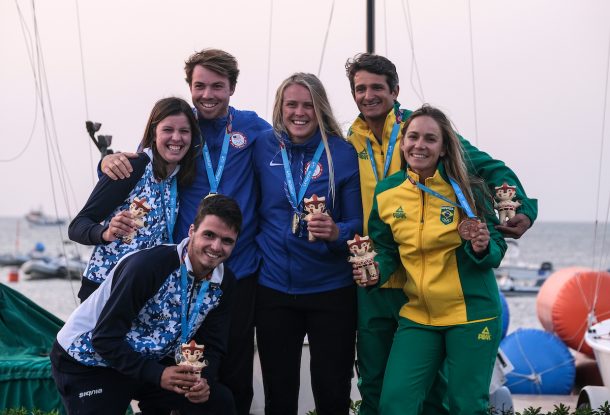 These results are unofficial and only for fans to get an idea of what is going on. There is very limited information coming from the regatta, so we’re just trying to do our best to pull it together.

Here is the link to the official results service.

After Wednesday’s blowout, the sailors were eager to get back to what they do best – sailing as hard and as fast as possible in a bid for glory.

A full schedule of racing was completed and the leaderboards are shaping up nicely ahead of Saturday and Sunday’s Medal Races which will be live on World Sailing’s YouTube channel – www.youtube.com/worldsailingtv.

After watching their teammates Ruggero Tita and Caterina Banti (ITA) win gold at the 2018 World Cup Series Final, Italy’s Vittorio Bissaro and Maelle Frascari are fighting hard for glory in the 24-boat fleet.

Bissaro and Frascari have sailed sublimely and from four races, sailed their way to a 2-5-2-1 scoreline. However, they have only managed to build up a 6 point lead, as three other team have emerged from the pack to set up a super final stage of the regatta.

For Bissaro/Frascari, a win would be their first in the foiling Nacra 17, and set them up as true challengers of Tita/Banti, who have dominated thus far in the foiler. For Tita/Banti, they have sailed well all season, but not to the level of dominance they displayed in 2017 and 2018.

For Besson/Riou (FRA), the duo won all four world championships in the 2013-2016 quad, but then failed to win a medal after helm Besson suffered through the regatta in agonizing pain from a back injury. Riou then sailed around the world in the Volvo Ocean Race, setting the duo behind in developing their foiling. However, after a return to health for Besson and a return to competitive racing, they seem to be progressing at each event. It almost seems inevitable that the former World Champs will get back to the top of the podium at some point, but when.

The final compelling contender is Gimson/Burnett. After completing their best ever major performance, a Silver at the 2019 Volvo European Champoinship, their performance must have been bitter sweet as it was their team mates Saxton and Bonniface who won, and would have been assumed to claim the single spot to the test event for the British Sailing Team.

Normally missing a test event is just not ideal, but for Gimson/Burnet it could have been devistating because conjecture is the brits will select any team from the test event who place in the top 5 there for the games.

However, shortly after the Euorpeans, World Sailing invited the British Sailing team to send two teams to the test event, to make up extra numbers, so now both top British teams will get a chance to attend.

Gimson and Burnet are in Marseille to gain extra racing time in the Nacra 17, while Saxton is racing the J70 this week.

Check out the overall results.

After winning the single 49er race in strong breeze the day prior, Spanish brothers, Federico and Arturo Alonso completely dominated the four fleet races on Thursday.

The Spaniards won the first three races and concluded the day with a second. As a result they have opened up a 21-point advantage over Benjamin Bildstein and David Hussl (AUT). Overnight leaders Kévin Fischer and Yann Jauvin (FRA) were penalised in the first race of the day and raced in the middle to lower end of the fleet. High scores have pushed them down to fourth.

The Alonso brothers have not had a great season, but much like they did on their run to the 2015 World Championship bronze medal, they show again that on their day they are elite performers.

Julie Bossard and Aude Compan (FRA) shone in the 49erFX. Two race wins, a second and a third, positions them at the top of the pack, ten points clear of Aleksandra Melzacka and Kinga Loboda (POL). 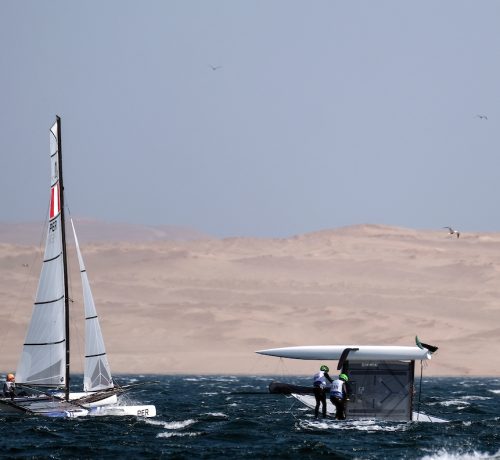 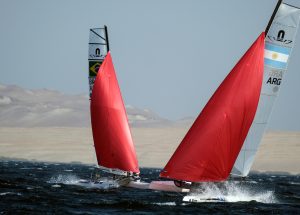 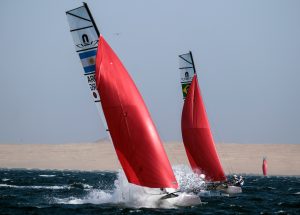