Shanghai Cup delivers a fun regatta, far from the standard in Olympic Sailing. In perfect foiling conditions, a dozen races were contested between a dozen nations on a perfect sailing lake in the outskirts of Shanghai.

The first race of the final day of the was full of drama. Team GBR had a penalty, a sudden gust of wind caused Team Japan to capsize, while Team Italy led the race under the heavy wind. Team Austria suffered a technical problem in the downwind which affected its finish, giving Team Italy the opportunity to take the advantage and win the race, followed closely by Team Sweden.

Team Sweden took a wire to wire victory in race two followed closely behind by Team Japan and Team Austria. Unfortunately, Team UK touched the leeward mark and dropped back as a result. The heavy wind had already exhausted the sailors after two races with four more to go.

Race three was taken by Team Austria with Team Norway and Team UK in second and third place respectively, while Team Hong Kong, Team Australia and Team Italy all capsized during the race.

During race four, Team Sweden, Italy, UK and Austria showed some eye-catching performances whereas Team Finland had to abort the race due to equipment failure. Team Austria won race five with Filand in second place after having its equipment fixed and Norway staying in third.

With conditions climbing to 21 knots on the final day, John Gimson with Anna Burnett (GBR) held their nerve in the final race to hold off 2016 Bronze medalists Thomas Zajak with Barbara Matz (AUT). Pluky youngsters Emil Jarrud with Cecelia Johnsson (SWE) climbed the standings on the final day to claim third on the podium.

Racing was conducted on Days 1 and 3 of the event, as day 2 was blown out when a typhoon pulled too much wind through on the second day. The first day had 8-12 knots of breeze, and the America’s Cup style course was used including reaching starts and finishes. On the final day the breeze was between 15 and 21 knots as teams flew around Dishu lake at full speed.

Because the lake is almost a perfect circle and roughly 30% larger than is needed for an Olympic class race course, there is no fetch for the waves to build greatly on the water. As such these Nacra 17 teams could run the downwinds at full speed, instead of throttling back producing top speeds over 25 knots frequently through the day.

After days of ripping around on the water, teams were hosted a 3 minute walk from the boat park in the four star hotel/resort punctuated by a night at the local Alphouse (beer garden/bbq) and a cruise down on the Bund.

Team UK was crowned the overall winner of the 2018 Shanghai Cup that took place at the beautiful Dishui lake. Second place went to Team Austria, followed by Team Sweden in third. It was a beautiful event that left great impressions to all the participants.

For the results, photos, videos and more, head to the event website.

Thanks to Our Partners

The Nacra 17 Classes is sponsored by Magic Marine. Head to our store for a selection of great technical gear! 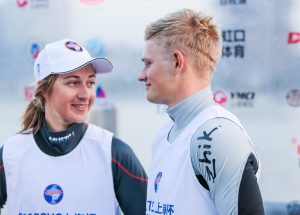