Rupert White with Kirstie Urwin scored a pair of third and won the middle race to move up from ninth to third overall. Gimson and Burnet (GBR) continue to lead despite scoring their worst race of the regatta on the first race of the day.

Odile van Aanholt with Elise de Ruyter (NED) surged into the lead just two days after Odile was hoisted off her boat in a frightening incident at the windward mark. The Dutch pair took the low points of the day by a wide  margin compared to the other top teams, and now hold a 20 point lead.

In light winds that were always unsettled they scored two top 10’s as many top teams fought through Black Flags and results in the 20’s, before they won the final race of the day to take command of the regatta.

The Schulteis sisters (MLT) had been unflappable until this point, but started with a BFD and then had a 17th and a 19th to score more points than they had on the rest of the regatta combined. They sit in second overall, which is a remarkable achievement in any case, as they aren’t even really a team, or racing in their planned positions. Helm Antonia is off to full time university and not pursing the Paris Olympics, while crew Victoria is actually the normal helm but switched over to crew as her sister just jumped on the boat to help her get started this week.

Canada’s Lewin-LaFrance sisters were the only team with two top fives on the day, unfortunately, also with their second black flag in a row. UPDATE – the RC reviewed their tapes overnight and determined that Canada and FRA 123 (Lovadina / Riou) were not Black flagged, and each team was given redress for not being able to participation in race 10 instead.

So far conditions have been light to medium all week, but the forecast for day five is for breeze into the high teams, which may shake up the leaderboard yet again.

Consistent Run of Races Continues for Fischer and Graf (GER)

Only one race was held for the 49er gold fleet. Prettner and Flachberger (AUT) took the win, but it was Tim Fischer and Fabian Graf (GER) in second who took the overall lead. Remarkable, it was the Germans seventh consecutive race in the top four, a remarkable run in fleets of 30 boats.

Most of the top players had decent races, so the battle remains tight at the top and gold fleet racing will determine this years European Champions. 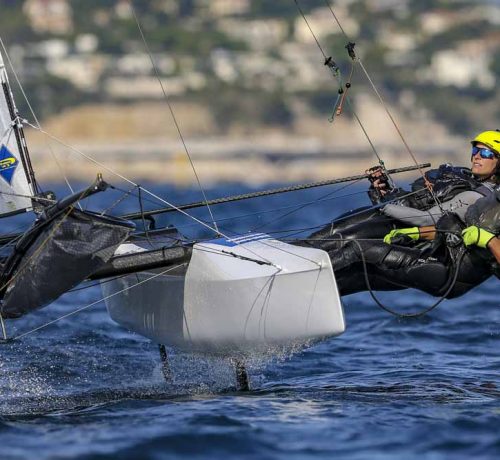 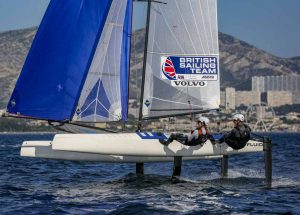 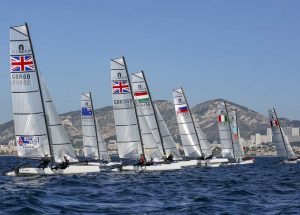 Who is your Sailing Hero?

Teams and coaches must register for the event in the Manage2Sail system AND Pay for their entry through the class payment portal.

Map of the event venue

The best young Nacra 17 sailors will come to Marseille for the first time. Site of the 2024 Olympic sailing in the Paris Olympics, these U23 sailors and future stars of Olympic sailing will get and early preview of their ultimate goal.

In 2018, the Olympic series are back in Marseille from August 26 to September 1 with 3 World Youth Championships: 49er, 49erFX and Nacra 17. The best crews will have a glimpse of Paris 2024. 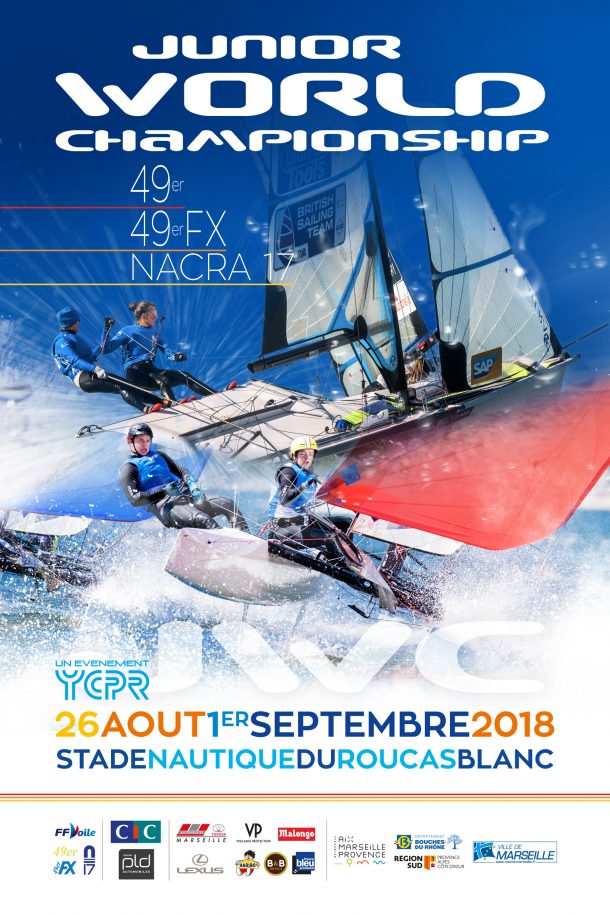