Mallorca, Spain (April 2, 2018) – The light, unsettled breezes on the Bay of Palma presented a really testing opening day at the 49th Trofeo Princesa Sofia Iberostar. With a maximum eight race courses in operation, it was often the case that one Olympic fleet was struggling in next to no breeze while classes on the opposite side of the substantial bay was enjoying good racing in 10 knots of wind.

The first day was something of a baptism of fire for Britain’s Nicola Boniface in the Nacra 17 fleet. Drafted in to partner world championship winning helm Ben Saxton after an injury sidelined crew Katie Dabson, Boniface proved herself up to the task as they sailed 2,1,3 for the day to lie third after the discard is applied.

“This was really last minute,” Boniface explained. “I arrived yesterday and have not sailed for four months. We had a quick sail for an hour yesterday. It is nice to be back in the boat and the conditions were beautiful, not too physical. Ben and I have been mates for a long time but we are just learning how it works in the boat together. We will just try to enjoy the week and to learn and hope Katie gets better soon.”

In the Nacra 17 the Italian world championship bronze medallists Ruggero Tita and Caterina Banti dropped to second behind world champion Ben Saxton sailing with Nicola Boniface. Like many others the Italian duo have been winter training in comparitive isolation, with a group in Cagliari, Sardinia, and could not race in Miami because they only have the one boat. Tita recalled today, ” Actually there was big waves we prefer flat water but are overall we are still happy to be fast downwind. We are here to see how our winter preparations worked. We had a long winter training in Cagliari and did not sail in Miami because we only have the one boat. There were many other teams there from Belgium, Finland and Denmark. We are looking to the worlds and to qualify the nation and then go from there.”

Saxton and Boniface sailed a 1,1,2 to lead the Italian duo by two points. Their tally for the day was matched by Spanish veteran Fernando Echavarri and Tara Pacheco from whom Saxton and Katie Dabson snatched the 2017 world title on the last run of the last race in La Grande Motte last September. Boniface is subbing in for injured Dabson for this regatta. Day 3 – Palma Pumps Up the Breeze For Finals

Bang on cue Mallorca’s Bay of Palma fired up the best breeze yet of the 49 Trofeo Princesa Sofia Iberostar as the Finals phase started for most of the ten Olympic classes. In warm spring sunshine the breeze puffed to 18 kts at times to present a new, more physical challenge.

New Zealand’s Olivia Mackay and Micah had a close to perfect day with two wins in the Nacra 17 class and a second to move up to fourth, the biggest movers of the the day while Italy’s Ruggero Tita and Caterina Banti extended at the top. They are showing the benefits of their intensive windy winter in Cagliari, Sardinia now 14pts ahead of the pack. They have been driven through the winter by memories of the final race of the World Championships when they scuppered their title chances in a collision with Spain’s Iker Martinez and Tara Pacheco.

After 12 races the top two teams, Italy’s series leading Tita Ruggero and Caterina Banti and GBR’s world champion Ben Saxton sailing with stand in crew Nicola Boniface are well clear of third.
But the big movers today were Spain’s Iker Martinez and Olha Maslivets, a partnership which was only first cemented here one year ago.

Spain’s sailing hero, double Olympic medallist Martinez races for the Sofia co-host S’Arenal club and lives here where his children are at school.

He affirms that he and the former Ukranian RS:X four times Olympian are still very much on their learning curve together. And today their 2,2,3 was the perfect antidote to a ‘catastrophic’ Wednesday.

“Yesterday when it was windy it could have been a good learning day but in the end it was catastrophic. Because we misunderstood each other we had a capsize and damaged the mainsheet, the traveller, the boom and ended up breaking the mainsail. And then had two races out.” Martinez reported, “So today was more like the first two days and we know how to set up the boat better for this kind of conditions with the rudders, the spreaders and other things. We just sailed the boat a little better.”

He continues, “It is difficult to know where we are. The big unknown really is still foiling upwind and how we will be able to. Right now we know but we are not prepared to use it racing. I think it is a question of time. But when it happens it will change the whole game. Today during the last race I was thinking ‘right, conditions are perfect we should go for it. And then I am thinking ‘but it is the first regatta of the season. We need to get the best result we can.”

Yesterday’s rollercoaster is replaced by today’s small successes. Martinez reflecting, “I always think this year is going to be a little easier, more relaxed but then every year it gets worse, more and more. I still enjoy it all, a lot. When things are not happening as you want it is hard, but it was like that twenty years ago when I started out!” The clash between the offshore gradient breeze and the thermal sea breeze made for difficult medal racing conditions with big gains and losses made during the class showdowns.

Italians Atone
A bitter disappointment in the final race of the 2017 world championships, when they erroneously hit Spain’s Iker Martinez and Olga Maslivets at the first windward mark approach, robbed the young Italian Nacra 17 crew Ruggero Tita and Caterina Banti of their chance to win the world title. Their error has preyed on their minds and has been just one spur to work even harder at their Cagliari, Sardinia training base over the winter. So too the arrival in the Sardinian capital of the Luna Rossa America’s Cup program. The Italians have built an unassailable margin in the Nacra 17, often showing a downwind speed edge in the breeze.

“The accident was a motivation because we were so close to winning and it could have been avoided.” Tita commented, continuing, ” We are so happy to win the first event of the season. We have been in Cagliari for the whole winter with good partners and that was really important for our programme. Here we were really quick, mostly downwind. We have always been fast downwind in the strong winds but for the light winds days we were in trouble, so we did well today.”

Catch all the results, photos, videos and links at the event page. 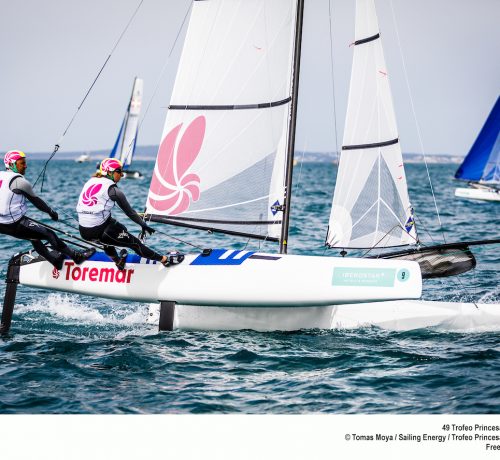 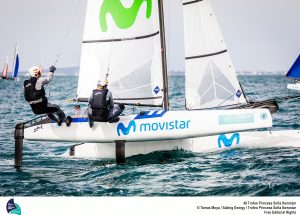 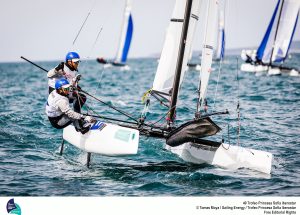