Waterhouse and Darmanin On Top Over Full Range of Conditions

With nine full-fleet races in the books, and just three remaining, for the Nacra 17 at the 2018 World Cup Series Miami, USA, this much is clear: anyone hoping for a place on the podium in the Mixed Multihull is going to have to knock a defending Olympic medalist down a peg.

Five of the six sailors that won medals in the Rio 2016 Olympic Games are sailing in the class this week, and showing little willingness to share the wealth, so to speak.

Rio 2016 silver medalists Jason Waterhouse and Lisa Darmanin (AUS) have done their homework when it comes to the lifting foils that were introduced to the class less than a year ago. Whether in near-drifting conditions on the opening two days or the full-on breeze on the third, they have been extremely hard to beat, winning five races and posting just one finish outside the top four.

All of the fleets enjoyed big winds on the third day of competition in Miami as a north eastern breeze brought 17-20 knots ensuring plenty of high flying action in the Nacra 17 and the remaining nine Olympic events.

543 sailors from 50 nations are racing on Biscayne Bay, just off Coconut Grove in Miami, Florida, USA. Two more days of competition remain with Medal Races on Saturday 27 bringing the first major event of 2018 to a close.

“Today was great, quite fresh, which is tricky on a foiling boat,” said Waterhouse. “We scored a three, two, one but we threw away a few points in the first race due an equipment malfunction, which was quite disappointing.”

With a 17-point lead, Waterhouse and Darmanin have a few points to burn. And, he added, there is an upside to the malfunction.

“We are trialing a lot of new systems and we had an issue where something got caught and we couldn’t get the spinnaker up,” he said. “We are actually pleased that happened because we can learn from it. Imagine if that happened at the World Championships or the Olympics.”

While the results indicate Waterhouse and Darmanin have a solid handle on sailing the foiling catamaran at the edges of the acceptable wind range, both acknowledge this is no time to get complacent with what is essentially a new class, even though the platform, with a traditional daggerboard and rudder, was used at Rio 2016.

“The reach from the offset to the finish is definitely quite gnarly,” Darmanin said. “Being a new class, we are all still learning to find the best way to get across the death angle. You can never know what can happen, but we try our best to stay safe but race at the same time, it isn’t easy.”

The reigning Olympic gold medalists in the class, Santiago Lange and Cecilia Carranza Saroli (ARG) are second, though they have nearly matched the Australian team over the last five races.

“We had a tight Regatta in the Rio 2016 Olympic Games with Jason and Lisa and I admire them a lot.

“For the last six races we were neck and neck and I do love it. It’s what makes sailing enjoyable but we look forward to catching them up tomorrow,” said Lange.

The bronze medal skipper from 2016, Thomas Zajac (AUT) is sailing with a new crew in this Olympic cycle, Barbara Matz (AUT). While the consistency hasn’t been where they would like to see it, the new partnership has shown plenty of potential, winning one race and finishing second in two others.

For most of the 21-boat 49erFX fleet, which didn’t start a race until 14:40, when the wind and waves were peaking, today’s conditions proved to be too much with only one race completed.

“Well put it this way,” said Anika Lorenz (GER), when asked about the challenge presented by the wind and waves, “only five boats finished the race without capsizing. It was tough out there with 17 to 20 knots.”

In fact, just seven boats finished the race at all. Many of those who survived the tightrope walk of rounding windward mark found turning back upwind to be a bridge too far. After one race the race committee sent the fleet in for the day.

Jurczok and Lorenz were one of the few teams to handle the conditions well. The duo extended their win streak to four races and pushed their lead to 10 points over Ragna and Maia Agerup (NOR) who are in turn 10 points ahead of Tanja Frank and Lorena Abicht (AUT).

The strategy for the day, said Jurczok, was fairly straightforward, “To start clear and to go as fast as possible with less manoeuvres and play it safe without capsizing. The Brits and the other German team were the ones we were keeping an eye out for, they sailed really well.”

Speaking of the British, Dylan Fletcher-Scott and Stuart Bithell (GBR) move up one place in the leaderboard and are now first in the 49er.

With challenging conditions, yesterday’s leaders, Sime and Mihovil Fantela, drop to 19th place. However both Spanish teams in the fleet have used today’s strong winds to climb up the table.

Diego Botín le Chever and Iago López Marra (ESP) had a good day on the water, winning the first three races and getting a second in the fourth. They now sit in second place overall and Federico Alonso Tellechea and Arturo Alonso Tellechea (ESP) are third. 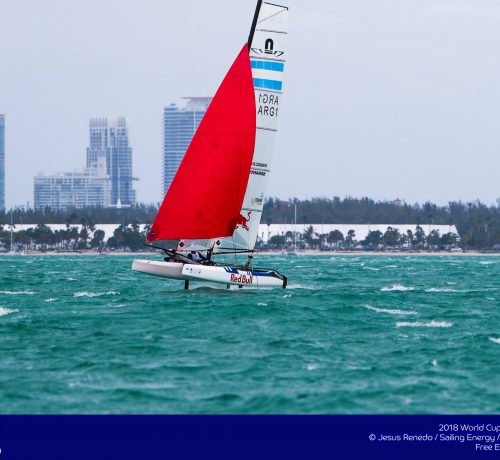 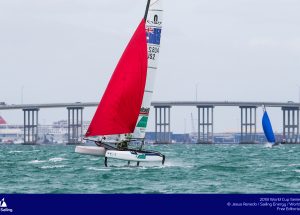 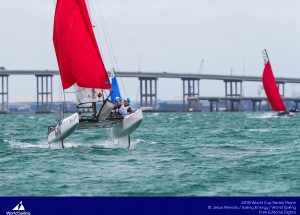