Redemption, Elation, and a Reboot for Wins in Genoa

Racing was scheduled to start at 10:00 local time but a light wind meant the racing was delayed by an hour. When the first Medal Race kicked off, 5-6 knots of western breeze played out across the racing area before it picked up to 6-7 knots.

The Nacra 17 fleet were the last to complete their Medal Race as the breeze picked up slightly enabling the boats to get up on the foils.

Ben Saxton and Nicola Boniface (GBR) held a seven point lead heading into the Medal Race so the advantage was theirs.

The British team had a tough start and found themselves sandwiched in the pack. Meanwhile the Spaniards, New Zealand’s Gemma Jones and Jason Saunders and Argentina’s Santiago Lange and Cecilia Carranza Saroli pushed ahead.

Jones and Saunders led at the mid-point but the Spaniards attacked and grabbed the lead. The Argentineans then went on the attack and picked off the Spaniards on the final downwind.

Lange and Saroli claimed the race win which propelled them into the bronze medal position. The Spaniards finished second and when Saxton and Boniface followed in sixth, gold was officially theirs by a single point.

“For us it was important to get a medal today,” said Martinez. “We only noticed where the British were on the second upwind. We hadn’t noticed them as we were too busy so we fought hard to pass the ones in front.

“We’ve been working very hard. We have a new boat and we struggled in Palma. We were not fast enough and we weren’t good enough. This week was a very light week so we know that we can perform in the light but that doesn’t mean we will perform in the medium or strong winds.

“We’re still far away from other guys we’ve beaten this week, Ben for example. The Italians and New Zealand were also very strong this week. We’re a long way away from them.”

The fleet rarely races in winds quite so light, and we could see on the broadcast how different teams set up their modes quite differently in the super light conditions. With the foiling Nacra 17 in it’s first quad, there is still much to learn by the fleet, and we saw the different approaches on display.

Here is how Martinez and Maslivets sailed upwind. They put both hulls in the water, and then reduced drag of the hulls by moving forward as far as possible, and reduced windage by having Maslivets twin the spinnaker chute.

In contrast, here’s how Saxton and Bonniface looked to reduce drag. Both are quite a bit farther back in the boat, with Saxton on centerline leaving Bonniface to constantly balance the boat with the windward hull out of the water. Typically it has been hard for teams to use the windward foil to generate lift without it causing too much drag and leeway to become a net gain, but by using bodyweight they sailed a completely different mode.

For Martinez and Maslivets it’s their first strong performance since withdrawing from the 2018 Worlds due to a modification in their boat being found at the 2018 World measurement. After being in limbo for months waiting to see if further penalties would be pursued by either World Sailing or the Spanish Federation, the duo got back on track to racing in December, and competed again in January.

Taking 6 months out of the circuit in the middle of the quad and missing a World Championship is quite a setback for any team to face. These two have tremendous experience behind them and a good result will boost their energy for the work ahead of them.

Despite racing on just about the wind minimum, although it was building during the Nacra 17 race, the fleet still flew downwind, which is a testiment to the powerful four point foiling system being used. The of the visual of the boats flying downwind at 16 knots were elating, especially when compared to the relative slog upwind.

Elation for Odile and Marieke

The 49erFX fleet were the first fleet to sail. Heading into the Medal Race, the advantage was with Italy’s Carlotta Omari and Matilda Distefano who led Ida Marie Baad Nielsen and Marie Thusgaard Olsen (DEN) by four points. The Dutch team were eight points off the lead in third.

Van Aanholt and Jongens started conservatively in the middle of the pack and read the shifting conditions on the race track well. They kept manoeuvres to a minimum, maintained good speed and grabbed the lead at the first mark. From there the pair retained the lead through to the finish, hoping results would go their way for them to grab gold.

Steph Roble and Maggie Shea (USA) put themselves in contention for a medal by keeping close behind the Dutch team. Meanwhile, the leading Italians and Danes were towards the back end of the fleet.

Omari and Distefano came through in seventh which handed the gold to van Aanholt and Jongens as the Italians settled for silver. Baad Nielsen and Olsen followed in ninth which meant they dropped from second to fourth as bronze went to Roble and Shea who finished second in the Medal Race.

“Pffft,” said a relieved van Aanholt ashore after racing when asked about the race. “I told Marieke before the race, ‘mate, I’m quite nervous.’ But she said not to worry about it, that it was just another race and that I could do it. We have a nice base of trust, we always have and that helped us.

“Before the start routine there were lots of shifts. We didn’t have a strict plan, we just went with what we saw and it worked out.”

Hempel World Cup Series Genoa is one of two Dutch Olympic qualification events in the 49erFX. Van Aanholt and Jongens have given themselves the perfect platform to qualify for Tokyo 2020 as their main rivals Annemiek Bekkering and Annette Duetz finished ninth.

“We’re definitely happy but we won’t let it get to our heads,” said van Aanholt. “We’re only half way and anything can happen at the next event. We’ll try to do as well at the next regatta. We’ve been in the top ten a lot and we’ll be aiming for another top ten finish.”

The Dutch 49erFX qualification for Tokyo 2020 will conclude in Weymouth, Great Britain at the 49erFX Volvo European Championships in May.

The Dutch 49erFX squad is deep and strong, and six years in the making. The dutch federation typically only supports 5-7 of the Olympic classes, and did not venure into skiffs for most of the history of the 49er. After the 49erFX was added, they shifted their philosophy and pushed all of their sailors transitioning from youth to senior racing into the 49erFX – both men and women.

Odile van Aanholt sailed for Aruba in the last quad, and just missed out on qualification to the games. Holding a Dutch passport, she joined the Dutch squad right after Rio. The squad had all sailors trading around teammates, and skippers/crews through 2017, before settling on pairings for the 2017 Worlds. Van Aaholt gained in Jongens from having the most experienced crew from the group, as Jongens is a veteran of two 470 campaigns as the 2nd female 470 team.

The Dutch teams took things easy in Palma two weeks ago, with Bekkering and Duetz even skipping the first day of light air racing to keep mentally fresh, such was their focus on performing well in Genoa. With a full week of such light winds in Genoa, the results aren’t quite a full reflection of the fleet, but in a trials it does not matter and van Aanholt and Dongens now take a stranglehold on the track to Tokyo.

Holding a six point advantage heading into the final day Australia’s Gilmour brothers stayed out of trouble in the 49er Medal Race, claiming a fourth which handed them gold, defeating two Kiwi teams.

As many as seven teams had a realistic chance of claiming a medal heading into the final battle. Starting the day in seventh overall, Croatia’s Sime and Mihovil Fantela put serious pressure on the fleet and at one point moved up into a medal spot.

There were several ups and downs throughout the race as the predicted medal table continuously changed.

Kévin Fischer and Yann Jauvin (FRA) took the Medal Race win but were never in contention for a medal. They were followed by Isaac McHardie and William McKenzie (NZL) and this propelled the young Kiwis into silver medal position. Their compatriots Peter Burling and Blair Tuke (NZL) came through in sixth as they held on to a medal spot.

The Croatians early charge resulted in a third place which saw them miss out on the podium by just four points.

On beating the two New Zealand teams to gold, David Gilmour said, “It’s always nice to get one over the Kiwis. They’ve had a lot of success against us. It’s nice to have one now but I’m sure they’ll be difficult to deal with in the regattas to come.

Over the December to February period, Yachting New Zealand and Australian Sailing did a good job of coordinating their regatta and training schedules, so it allowed the squads from both nations to get some extra competition and training time together compared to years past. The down under crowd often head into the Northern hemisphere summers with plenty of momentum after great training at home.

“We [the brothers] have been sailing together for the last nine months and this is our first major result. We’re stoked at the moment and hopefully we can carry this performance to Weymouth at the Europeans in a few weeks.”

David Gilmour finished 3rd at the 2017 worlds with crew Joel Turner, after a fantastic first season together in the 49er. After 8 years of the Aussie fleet chasing around Nathan Outteridge, there was light for all Aussie teams, and it seemed Gimour and Turner would pick up the mantle. Then in 2018, little went right for the duo, and eventually it lead to their split shortly after Aarhus Worlds, with both starting fresh into new partnerships. 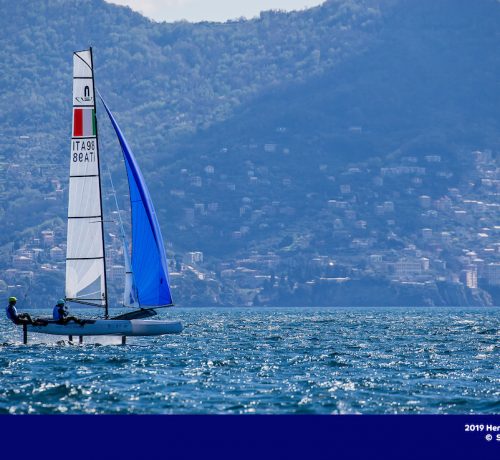 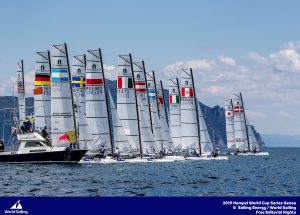 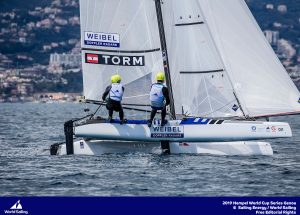