Racing got under way with Argentina and Great Britain fast out of the start on day 5 of the 2020 Forward WIP European Championship. ITA26, Ruggero Tita and Caterina Banti were close to the overall lead and put the hammer down just as they had a few weeks ago when they dominated Kiel Week. At one point the Italians were even foiling upwind. “We overstood the layline slightly,” said Tita, “so we went into foiling mode. It was fun to be in those conditions again.”

Italy and Great Britain went around the windward mark neck and neck, but Tita/ Banti put a small gap between themselves and the reigning World Champions John Gimson and Anna Burnet. Argentina’s Santiago Lange and Cecilia Carranza Saroli dropped back a little during the three-lap race, finishing 8th across the line. The Italians enjoyed a comfortable victory about 20 seconds ahead of the British, France’s Quentin Delapierre and Manon Audinet close behind in third.

It was the windiest day of racing yet, but only lasted for a short while as the conditions changed wildly across Lake Attersee.The Nacra 17 fleet had to ready themselves for a very different challenge to the one they had been anticipating. In a matter of minutes before the first start, the soft, fluky warm southerly breeze was swiftly swept aside by the arrival of rain clouds and gusts up to 25 knots from the east, across the width of the lake.

Sadly the strong breeze failed to stay long enough for further racing. Argentina’s overall lead is cut to 5 points, with Great Britain in second and the Italians another 3 points back in third.

49erFX: Norway closes in on Germany

In the first race of the afternoon, Willemijn Offerman and Elise Ruyter of the Netherlands took the winner’s gun ahead of Norway’s Helene Næss and Marie Rønningen. Third across the line were another Dutch team, the double World Champions Annemiek Bekkering and Annette Duetz. The series leaders Tina Lutz and Susann Beucke suffered a rare fall from grace, finishing 14th across the line.

This put the Norwegians just two points behind Germany in the overall standings. After a long while waiting for the new wind to settle, the next race eventually got underway but only in marginal trapezing conditions. There was a big pile-up at the pin end of the start line and it took a while for some of the fleet to extract themselves from the melée. The Norwegians were chasing the Germans on port tack, but new stronger breeze from the left, saw Næss and Rønningen lift up inside Lutz and Beucke. Norway led around the mark by two boatlengths from the Germans who squeezed around the mark narrowly ahead of a Swedish and Croatian boat and the rest of the pack.

The Norwegians and Germans picked up the last of the breeze to carry them down at good speed towards the bottom of the course while the two boatlength deficit for the next boats translated into more than a thousand metres of advantage for the front two in the race, also the front two on the leaderboard. But the race was abandoned before Norway reached the leeward gate.

An opportunity missed, but as ever the Norwegians take it in their stride, laughing at their bad luck but ready to battle another day. With a 16 points gap back to third placed Italians, Carlotta Omari and Matilda Distefano, Næss and Rønningen are more likely to be looking forward at the Germans two points ahead, wondering if they can win back the European trophy that they won two years ago in Poland.

The 49ers didn’t manage to complete a race, although the one that was abandoned was still pretty thrilling. Jonas Warrer and Jakob Precht lost the pre-start battle for the pin end to the Dutch team of Bart Lambriex and Pim van Vugt, and the Danes were forced to reach off underneath the fleet, giving away vital distance to find a clear lane. The next two minutes were a masterclass in how to fight back from a losing position and convert it into a winning one.

It became clear why the Danes hadn’t done the typical thing of tacking away on to port when the start went bad. They really wanted the left and had correctly anticipated the wind was trending that way. By the top mark Warrer and Precht had eked out a good lead, playing the small puffs and dodging the patches of zero breeze better than the Dutch who were eight around the top mark.

Then all hell broke loose as Force 4 gusts suddenly bulleted into the fleet without warning, accelerating the race from a drifter to full-on blast as some boats struggled to bear away. The breeze increased and shifted so far left so quickly that some boats had to drop their gennakers to make it to the leeward gates. Unfortunately for the Danes the race was abandoned but they at least could enjoy the confidence boost of having recovered so well from a poor start. The unreliable breeze on the southernmost race course meant no more racing for the 49ers today.

So the overall 49er standings remained unchanged, with Lambriex and van Vugt, holding a 3 point lead over Germany’s Tim Fischer and Fabian Graf in second overall with Šime and Mihovil Fantela of Croatia in third overall and just 5 points from the leader.

With the championship behind schedule and reliable wind in short supply, the organisers have opted for a very early morning start for the concluding day, in a bit to catch the southerly breeze before it dies out. Racing is scheduled for 7.20am, with four races each for the Nacra 17 and the 49er and 49erFX Gold Fleets. 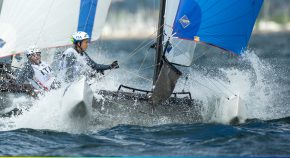 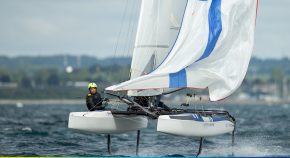 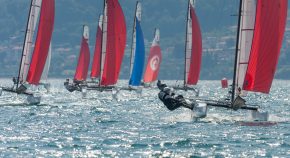 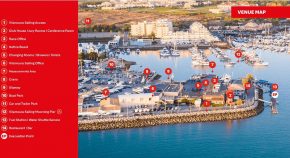