With only five days left to the start of the inaugurate Nacra 17 World Championships in The Hague/Netherlands, the organization received 66 pre-entries from 24 countries worldwide. Among them the fresh F18 World Champion Billy Beson (FRA) with his crew Marie Riou.

While many national teams opted for final training sessions on the race course off the Hague coast, some chose to change boats for the F18 Worlds in Italy. In addition to world’s best F18 helmsman of 2013, the numbers 4 to 6 and 9 will also line up for the 2013 Nacra 17 Worlds.

The French Moana Vaireaux and Manon Vaireaux finished 6th overall as best Olympic duo and first mixed crew in the F18. With their recent performances in the Nacra 17, bronze in Palma and gold in Medemblik, they count as one of the favourites for a podium position at the Nacra 17 Worlds.

According to expectation, the Dutch team will be very keen to win on its home water, taking advantage of an early start of the road to Rio 2016. No doubt that local Mandy Mulder, Beijing silver medalist in the Yngling, and Thijs Visser are eager to taking revenge on their disappointing result at the Delta Lloyd Regatta. After having led the competition convincingly, they lost their top position on the last day of the new format, with the points value of the ranking plus the Medal Race as final result.

Meanwhile, the venue and organization are getting ready and competitors are training at neighbour beach cat clubs. On Sunday July 21 2013, the first starting gun of the practice race will be fired at 2 PM. The opening ceremony will follow at 5:30 PM. Official racing starts on Monday July 29 at 11 AM and will be concluded with one last fleet race and one Medal Race on Saturday July 27. A total of 14 to 16 races is scheduled. The qualification series consist of 8 races.

For more information about the Nacra 17 Worlds 2013, see www.nacra17worlds.com. A new version of the event website will go live this week. 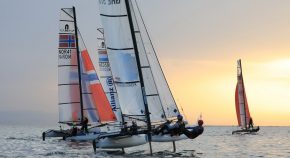 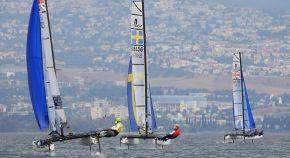 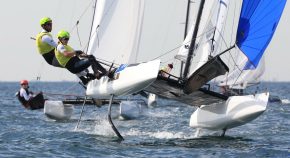 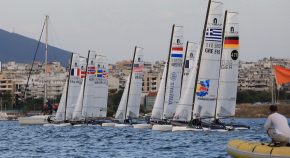