Italy’s world-beating Nacra 17 sailors were leading the race and the regatta until a woman overboard incident that has handed the advantage back to a local team.

A dramatic turn of events on the Nacra 17 race course has seen local sailors Paul Kohlhoff and Alica Stuhlemmer hold on to their yellow jerseys for the second day running at Kiel Week.

It was a breezy, shifty and cooler day on the race course that made consistent sailing difficult to achieve on the frisky foiling 17ft catamaran, although Vittorio Bissaro and Maelle Frascari seemed to have the best handle on the conditions. The Italians came from behind to win the first race of the morning and were in command until half way through race two. Foiling into a routine gybe on the second downwind leg, Frascari failed to hook on to her new trapeze securely and fell overboard. Now singlehanded with the gennaker still flying, Bissaro put on a strong display of great seamanship to turn the catamaran around and sail back upwind to Frascari who was swimming towards the boat as fast as she could.

Once back aboard, the onboard live camera showed that Frascari was in some pain. Her foot had clipped the razor sharp edge of the rudder as the boat sailed past. It looked like the Italians would have to retire from the rest of the day, as Kohlhoff and Stuhlemmer powered their way to victory in the second race.

Despite the earlier setback, the Italians were back for the start of the third race and sailed well to record a 4th at the finish. Making the early running after another successful port-tack start underneath the starboard-starting fleet, Tara Pacheco and Florian Trittel held the lead for a lap and a half until a big split on the second windward leg. Kohlhoff found more breeze and a good shift. Seeing his opportunity, the tall German hit a rarely-employed turbo button as he and Stuhlemmer stepped backwards and kicked the boat up on to the foils. The only boat to foil upwind all day, the Germans hit hyperspace and in just 30 seconds of foiling managed to put 200 metres of distance on the Spaniards. From there the Germans extended to cross the finish line 500 metres in front of the second-placed boat, which was the Austrian crew of Thomas Zajac and Barbara Matz who had also passed the Spanish.

After a dramatic day, Kohlhoff and Stuhlemmer keep the leaders’ yellow jerseys, staying two points of the Italians who currently are discarding their DNF [Did Not Finish] from their results, but who can’t afford any more slip-ups. Frascari went to hospital after coming ashore today, keen to ensure the injured foot is good enough to make it through the rest of the regatta. The Austrians have scored a string of 2nds and 3rds which puts Zajac/Matz in third overall.

It was a good day out for German crews in the 49erFX fleet, for Victoria Jurczok and Annika Lorenz in particular. Scores of 3,1,2 lift the Germans to first overall, two points ahead of the reigning World Champions from the Netherlands, Annemiek Bekkering and Annette Duetz. Tied on points with the Dutch are yesterday’s leaders, the young Swedish team of Vilma Bobeck and Malin Tengström who started well with a race win but then slipped up with a 19th and 10th. Bobeck was laughing at her own ineptitude today. “We couldn’t do anything right, we forgot how to sail,” she said, with enormous overstatement but also highlighting how ambitious she is after such a short time at the front of the senior fleet.

Kiwis on the rise

The Antipodeans continue to stamp their authority on the Men’s 49er fleet, and it was the irrepressible Kiwis, Pete Burling and Blair Tuke, who enjoyed a solid day with a 3,1,2 from their qualifying fleet. This lifts the reigning Olympic Champions to first overall, two points ahead of yesterday’s stand-out crew, Will and Sam Phillips from Australia. Tim Fischer and Fabian Graf were racing in the same red fleet as Burling and Tuke yet scored an even better 2,2,1 from the breezy day, which sees the Germans rise to third overall, just in front of two other New Zealand teams. Reigning World Champions, Šime and Mihovil Fantela from Croatia sit in 12th overall.

The breeze is forecast to be lighter for Friday, so that could see a change in the pecking order.

Kieler Woche, which takes place from 22 to 30 June, divides into two halves. The first half focuses on the international classes and is mostly about keen amateur sailors competing against each other. The second half shifts its gaze to the Olympic events. Across the whole nine days, Kieler Woche hosts more than 4,000 sailors from 60 nations, competing in more than 1,900 sailing boats. 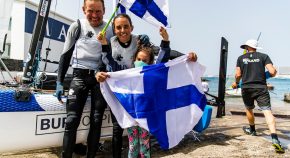 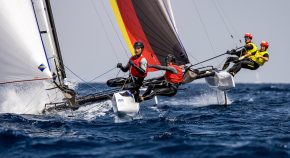 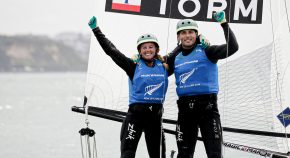 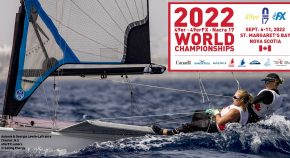