During last ISAF Annual Conference a lot of submissions and recommendations have been addressed and discussed, including subjects concerning the Nacra 17 Class. During the weeks before the Annual Conference we regularly have spoken with ISAF about some issues, also based on the feedback we received from sailors & coaches. At the ISAF website coming weeks all conference meeting minutes will be published. During the whole week and several meetings it was clear that ISAF is happy with the new Nacra 17 class. Some highlights concerning the Olympic NACRA 17 Class:

–       We are happy to inform you the ISAF Council has decided the Nacra 17 will be also be used as Olympic equipment in Tokyo 2020, which makes it for sailors and MNA’s better to prepare long term training and talent developments.

–       The Council has also made a decision about using supplied Nacra 17 equipment or own boats during the Olympics 2016. Based on the recommendations of the equipment committee and event committee, the council has decided the Olympics 2016 the sailors will be using their own Nacra 17 boats. The recommendations are based on a careful consideration, such as the opinion and arguments of the technical staff of ISAF, talks with sailors, coaches and MNA’s (which opinion is balanced between supplied equipment or sailor’s own equipment), the class association, the manufactory and the fact the technical boat makes it necessary sailors will need time to personalize their boats before the first start.

–        Sailing own boats also means ISAF will do more control of equipment next years during World Cup Events, World Championships and during the Olympics. Together with the class association, the class measurers and the manufactory the ISAF technical staff will work on new measurement and inspection procedures to be sure all boats are conform the class rules and specs of the manufactory.

–       Also the application of the Nacra 17 to become the ISAF Class Status has been approved. All criteria were met to officially become an Olympic ISAF recognized class.

–        The events committee and council have approved the concept recommendation of the Format Working Party Paper concerning the 2016 Olympic Sailing Competition including the recommendations to discuss with IOC and the Rio 2016 organization the number of medal race competition days. Next months the paper will finalized and definitely approved at the ISAF Mid Year meeting. Concerning Nacra 17 the proposal concerns 12 qualification races ( 3 races per day) + 1 Final medal race (top 10 from qualifying series). The scoring system will be the Low Point System (1 point for win, 2 for second etc) + double points for the Final (2 points for a win, 4 for second etc) and one discard after 5 races of the qualifying series are completed. The Final will not be excluded. Target times qualifying series 30 minutes and Final 20 minutes.

–        Following the selection of the Nacra 17 as the equipment for use at the Olympics, the proposal/submission from Yachting Australia to determine the most appropriate multihull for use at the ISAF Youth Sailing World Championship (from 2017) has been approved by Council. Nacra Sailing International already started designing a new youth multihull.

–          The Council has given “green light” to the executive committee to go on with the development of a new vision about the ISAF World Cup. In May the Executive Committee will come back with more information, details and answers about a lot of questions. And end of September 2014 a test event Grand Final for top 10 teams of all Olympic Classes will be organized. All Olympic Classes are still very cautious about the new concept. A new vision about the World Cup events is supported, but all classes want to keep their own World Championships. Next months it will become more clear how the new vision will be developed in association with the classes.

So far, some of the highlights of the ISAF Conference. For all details please check the ISAF website with all conference papers.

If you have any questions please let me know. 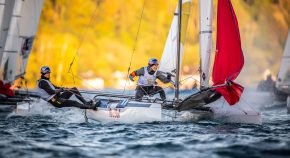