The story of the 2022 World Championships in Halifax was easily that Ruggero Tita and Caterina Banti won 14 of 16 fleet races winning the title before the medal race. It can’t be denied that, as Australian coach Darren Bundock put it, the pairing is a “class above” the rest of the world.

“Today there wasn’t much emotion,” said Banti, after being hugged by competitors. “We knew we had the championship. We have just been focusing on enjoying our race.”

Silver medalists Ugolini & Giubilei, who have been second now in two world championships in a row, certainly have made a step closer to this excellent level. But even this team that trains with the champions were in awe. “They are really strong, really fast, they are super,” said Ugolini, shrugging his shoulders with a smile. “We train together. We finished first and second. So it works.”

Ruggero made sure to note that they are pushing forward despite their unprecedented string of wins, a statement that puts the rest of the World’s fleet on notice that the hill to the top will only get steeper in the following months.

“We already have a big list of things to try and to do,” said Ruggero, who added that training with the other Italian teams including world champions Bissaro & Frascari has been a big part of their success. “It’s going to be a busy winter.”

Though there was an outside chance the younger Italians Ugolini & Giubilei could have lost the silver, the the real fight ended up being between the Finnish and Great Britain teams for bronze. The points were close and in the ultra light, “low-riding” conditions FIN 13 Kurtbay & Keskinen found their way around Gimson & Burnett then covered the pair tightly until the finish.

The worlds showcased an increasingly younger batch of foilers in the medal race. Argentina’s Majdalani & Bosco along with Jarudd & Jonsson of Sweden and Laila van der Meer & Bouwer of the Netherlands all put down top five finishes with the Dutch placing third in the medal race and up-and-coming Kiwis Wilkinson & Dawson winning.

Heading into the Northern Hemisphere winter, each of the top teams have a staggeringly long break between major events with only the Princess Sofia Trophy in Palma, Spain, in early April as a target. The new Nacra 17 articulating rudders were given to the sailors just before the 2022 Palma regatta and changed the face of racing in the class opening minds and possibilities with full upwind foiling.

With a winter of isolated training, it’s anyone’s guess how big the gains will be on the race course or who will bend their minds and find new gears and paths to leap-frog the gold standard set this year by the Italian teams. 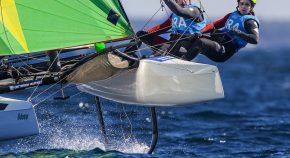