The other other Italians shift into lead

Mussanah, Oman – Three-time Nacra 17 junior world champs Gigi Ugolini and Maria Giubilei move into the Nacra fleet lead stepping over a Silver and Bronze medalist, and World Champion compatriots, Vittorio Bissaro and Maelle Frascari. It was a day where the left side of the course was paying all day long, but getting there was the hard part.

The Junior Italians won a race start to finish and had a third, but it was their seventh place finish that allowed them to move into first overall. Rounding the top mark in last place, they managed to pass half the fleet to limit any losses.

“We are very fast on the downwind,” said Gigi. “We knew that we had to make a big move and we went for it.”

Italy has already won three of the four World Championships since the switch to foiling, but it was other teams doing the winning before. Ruggero Tita with Caterina Banti won in 2017 and 2018 before winning Olympic gold, while Vincenzo Bissaro with Maelle Frascari won in 2019. While their countrymen were at the top of the senior scene, these other, other, Italians won three straight Junior World titles in the Nacra 17. Perhaps this week will be their time to shine on the senior stage.

Only three points behind are the Tokyo Silver medalists, John Gimson with Anna Burnett (GBR). “We made the day hard on ourselves, that’s for sure,” said John. “It was left favored all day, but we kept thinking the right would come in and the sea breeze would fade… it never did.” Their scoreline of 3, 7, 6 was their worst so far of the week, but good enough to be in the hunt for a second straight world title.

The top six teams in the Nacra 17 are still very tightsly bunched together, nineteen points apart with four races and a medal race remaining on the schedule. All of the remaining races will be covered live so tune in to watch this championship unfold.

Odile van Aanholt with Elise de Ruyter (NED) reclaimed their lead after an off day yesterday by flighting hard in each of the races right to the finish. They had no easy races, but said they kept optimistic and ‘figured out the day’ early, ending with 5, 5, 2 finishes.

The Dutch were the only team in the top seven to avoid double-digit finishes in a day where small shifts and varying breezes squeezed all four fleets into tight packs that were hard to escape.

This morning’s FX leaders by 10 points, Helene Naess with Marie Ronningen (NOR) struggled in the middle race, finishing 20th, their drop race. Despite some big recoveries and two top-five places they were relegated six points back in second.

There were three different race winners on the day. The Lewin-LaFrance sisters (CAN) started the day like day three by winning the leeward end and the race.

Double gold medalists Martine Grael with Kahena Kunze (BRA) won the second race running away by finding the same pressure on the far left side of the course on leg one. Despite the a ninth and 11th, the pair continued their gradual ascent to third overall, leapfrogging the young Finnish team who had mixed results.

Winning the final race of the day was Mathilde Lovadina with Marine Riou (FRA) who played from the same playbook for win, with a good start near the pin, winning the left and building a 200-yard lead. Maybe it was nerves, but the team’s spinnaker was nearly sucked under the boat in the last hoist, jeopardising their win. Lovadina was still frustrated on shore saying, “Always when you’re in the lead.”

There’s barely any daylight between the 49er Gold Fleet after a day where the teams struggled to break free of each other in the small chop and puffy conditions.

“It was quite difficult,” said German 49er sailor Fabian Graf, who, with Tim Fischer, are in second overall. “The breeze was unstable and it was choppy so it was difficult to keep the boat moving and pick the right lane and the correct side of the run.”

Halfway through the afternoon session, Dutch sailors Bart Lambriex and Floris van der Werken briefly gave up the overall lead to the Germans, but by sunset at the end of race 12 the Dutch team was back at the top of the leaderboard. A new pairing after Tokyo 2020, the Dutch team hold a slender two point lead over the Germans.

Mikolaj Staniul and Jakub Sztorch won the opening race of the 49er afternoon session, and the Polish team went on to sail one of the most consistent sessions with scores of 1,8,4. Winners of the European Championship in Greece a few weeks earlier, the Poles have moved up to 10th overall. The first race of the afternoon was a good one for the Poles generally, with Buksak and Wierzbicki coming in second behind their compatriots. Third across the line were the Americans, Ian Barrows and Hans Henken.

Winning the pin worked nicely today. And Hong Kong’s Akira Sakai and Russell Aylsworth were poised for their first top finish in a world championship. Looking good out of the pin end in the second race of the afternoon, Hong Kong were in the lead and sailed away to the finish, celebrating a great victory – until the crew discovered their start had been a little too good. UFD disqualification for starting a fraction too soon.

The start of the final race of the afternoon had to be recalled after an over-eager fleet were keen to get back to pizza on the shore. Race officer David Campbell-James hoisted the black flag and the fleet got away on the next start, with little more than 40 minutes of daylight remaining. The French came to the fore, with a 1,2 for the Fischer brothers in rival skiffs. By the leeward gate the siblings were neck and neck, Kevin Fischer and Noe Delpech choosing the left side and Erwan Fischer and Clement Pequin taking the right. Unfortunately right proved to be wrong for Erwan and Clement, and when the boats converged at the top mark for the final time, brother Kevin along with Noe had moved 100 metres ahead.

Kevin and Noe took the winner’s gun in the dying light, while Australia’s young guns Otto Henry and Miles Davey stole second place from Erwan and Clement just before the line.

It was a good day overall for Kevin Fischer and Noe Delpech, three scores inside the top 8 moving the French up to third overall and only six points off the lead.

We are live broadcasting the final three days of the Championship, including today. After an hour of waiting for wind, we moved into race trim by simulcasting from our main Vimeo feed and then adding our Youtube and Facbook channels. Unfortunately, the internet steam faded about three minutes into the presentation, and the vimeo stream dropped out. The link we shared with you all became worthless. Most of you probably found our youtube stream, and the racing was quite fun to watch, but we do apologize for the scramble. If in doubt, head to the event website at 49er.org or nacra17.org and you’ll find all updates there.

49er has three days of qualifying followed by two days of gold fleet and a medal race. 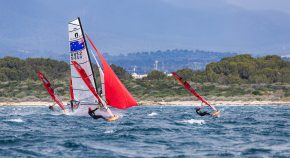 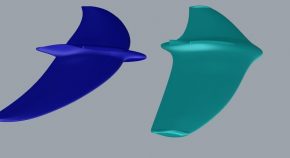 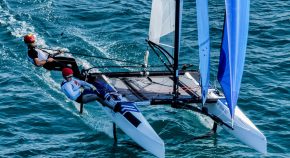 Game on at French Olympic Week 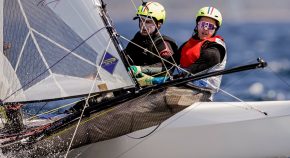